Edit
Welcome to the Kencyr Wiki
The wiki about P.C. Hodgell's Kencyr novels that anyone can edit

This wiki describes P. C. Hodgell's Kencyr high fantasy novels featuring Jame and her twin brother, Tori, and a complex world that is described in, currently, nine novels: God Stalk, Dark of the Moon, Seeker's Mask, To Ride a Rathorn, Bound in Blood, Honor's Paradox, The Sea of Time, The Gates of Tagmeth, By Demons Possessed; and a short story collection: Blood and Ivory: A Tapestry.

To write a new article, just enter the article title in the box below.

Not sure where to start?

Sacred space is the plane of existence of the native religions of Rathillien, such as the Merikit religion. Jame first finds herself there in Seeker's Mask, during the Merikit rituals in which she becomes the Earth Wife's Favorite. In it, distances seem vast yet at the same time are much more attainable than in the physical world. Jame theorizes that sacred space is Rathillien's soulscape; certainly, from there it seems only a small further hop to the Kencyr soulscape.

The Earth Wife's house appears to exist in sacred space and can open doors into the normal plane of existence seemingly as needed. 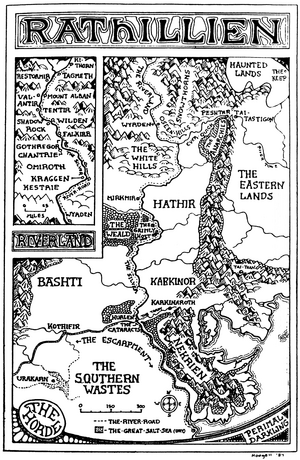 Thanks to everyone who posted on the Kendars' new state.  You've given me a lot to think about.  I'm still working through my reactions.Another question:  Jame has pretty well established her relation...

This  past week I turned in the ms for Deathless Gods + the maps, close to the first anniversary of the murder/suicide of  my old friends, George and Judy.  The novel is dedicated to them, "Deathless...

Got a question, maybe for a chemist: I'm thinking that the Shadow Guild Assassins write their contracts in the same mere ink that renders their cloth and skin invisible. What, then, makes the invisi...

Someone suggested to me that Death's-head should find a mate.  Actually, I'm thought of that.  Here it is: Several days later, Jame went out in search of Death’s-head.  The rathorn colt hadn’t been se...

Community content is available under CC-BY-SA unless otherwise noted.
Advertisement